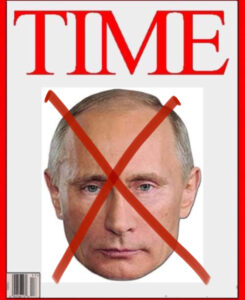 Make no mistake, what we are witnessing now is a momentous historical moment!  THIS IS HISTORY!  This is a JFK, 9/11 type moment you will remember where you were.

Four days ago Canadians were hurting from the most boring insurrection in history, matched only by the most lacklustre suppression of it.  American domestic politics seemed as helpless as they have been during the last decade.  The world was obsessed about COVID-19.  The peoples and nations of the world seemed divided, selfish, and skeptical about the merits of democracy.

Putin saw this and went all in assuming Ukraine would collapse and the World would do nothing!  Four days ago I would never have expected the unity, strength, and decisiveness we are seeing from NATO, the EU, Canadians and Americans, countless nations and organizations, in standing up against Putin’s naked aggression.  The world has probably never seen such a quick shift from increasing isolation, and self-interest, to an instinctively more open and nobler direction.  Call me naive, because I have been guilty of cynicism regarding most worldly events, but I think the free world has finally regained its confidence and composure after a long, rough ride indeed!

Want to know what it took?  The courage and tenacity of the Ukrainian people that the world dismissed so easily.  We looked at the relative manpower, economic and geopolitical strength of Russia and Ukraine, and compared the paper strength of Russian and Ukrainian arms, and concluded Ukraine was doomed.  To hell with human or moral factors, or historical forces that suggest free, desperate peoples everywhere will fight back if they are up against the wall!  History is full of examples of underdogs fighting off Russian invaders from the Poles and Finns, the Afghans and Chechens, and now Ukrainians will be added to the list!

It took, especially for me, the actions of Germany and its new Chancellor Olaf Scholz.  To say Germany has had issues with its past, historical reckoning, and identity would be an understatement.  But I am confident future historians will look back and say Germany rose to the occasion, and so did its new leader.  Four days ago people assumed Germany would not have risked its significant economic dependence on Russia over Ukraine by imposing increasingly harsh sanctions.  Or that Germany would send weapons to shoot down Russian tanks and aircraft in Ukraine.  Or the brilliant oration of Olaf Scholz on February 27th who finally gave this by now morose decade a speech worthy of JFK and Churchill.  Some GOD DAMN HOPE for a change!

Whereas Putin has recently used terms like Nazism and Genocide in the most cynical fashion Scholz painfully related German anguish regarding the past and recognized the need to heal wounds between the German and Russian people, and others elsewhere.  Whereas Putin has all but threatened nuclear war against the world Scholz echoed world opinion that while we were not looking for a confrontation we will finish the one Putin started.

Putin uses history as a weapon first, a justification second, and the search for truth last (actually he skips the last one).  Germany has done the exact opposite and is showing the way forward!  Putin’s 19th Century war of imperial aggression will not work in the 21st Century.  The World is too connected in real time to be able to ignore the tragic consequences of war and dictatorship any longer.

Right now the battle lines between dictatorships and democracies are being drawn (as they always should have been) and Putin’s regime has already been discredited and will probably fall sooner than later.  The rest of the cynical dictatorships, especially the CCP, will follow someday and not primarily because of outside forces but due to the internal rott that always destroys tyranny.  As Churchill once said “democracy is the worst form of government – except for all the others that have been tried.”

That is as true today as it has always been!