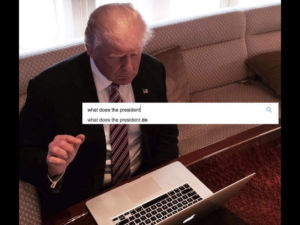 This man, some people think he’s a great man, that he’s a hero.  But his methods were the old ones of America… and he lost.  There is a saying in China:  “The water that carries the boat can also overturn it.”

This is going to be pretty harsh but please don’t think this is an attack on EVERY Republican or Trump supporter.  I can’t say I agree with much of what they sometimes think but I do know many personally that are smart, decent, and want to do well by the world.

A ruined economy, alienated allies across the world, cozying up to dictators like Putin, countless domestic scandals and a botched response to a pandemic that currently sees more Americans die each day than 9/11 or the death toll of the entire Iraq War.

Won’t even bother with the lying, cruelty, hypocrisy, constant falsehoods, erratic behaviour and basic lack of decency because in today’s world a lack of civility and integrity is all but expected not only in politics but elsewhere.  No matter he spoke his mind and told it the way it was right?  But speak your mind back to such people and they are usually as offended as the “snowflakes” they mock.

David Frum, a life long Republican with unequalled political knowledge has suggested many of Trump’s worse supporters liked him because they felt his example showed it was okay to be the kind of jerk they wished they were allowed to be in real life.  But don’t get me wrong here, not all of his supporters were like that, and there are plenty of jerks and loud mouths on the middle and left side of the political spectrum as much as they would like to suggest otherwise.  Maybe we could all try to be more pleasant and civil.  Remember how Joseph McCarthy was shamed and brought down by someone asking him “Have you no sense of decency, sir? At long last, have you left no sense of decency?”  Those days are seemingly gone.

Most disappointing of all Trump had no vision, except the GREAT VISION OF DONALD TRUMP, which is essentially a Cult of Personality.  All his die hard supporters who hate liberals, socialists and especially Communists don’t recognized the irony that they support his cult of personality as much as those fools across the globe who idolized Stalin, Mao and Pol Pot.  Because let’s be honest here his worse supporters could inevitably never bring themselves to admit he made any mistake, had any bad policies, showed reprehensible moral failings, or I dare say fail to live up to many of his lofty promises.  They tolerated anything from him, would not have accepted this from anyone else, and that again is the perfect illustration of a supporting a cult of personality.

He didn’t even care about the greater good!  There have been countless flawed, sometimes morally suspect leaders like Churchill and Chiang Kai-Shek, who at least had vision, cared about the greater good and rose above their many failings to produce positive legacies for their nations and the world.  Not Trump though… it was always about him.  If at the end of the day you blatantly, and constantly, choose your own interests above the country you may be a run of the mill politician, but you will never be a statesmen or a great man!

Has the swamp been drained, has the wall been finished, has the economy been fixed, has America become great again, ARE THE AMERICAN PEOPLE BETTER OFF TODAY THAN 4 YEARS AGO?  Where is the unity?  Has there ever been a more divisive leader in American history?

The guy wasn’t even nice to soldiers.  Allegedly mocking dead soldiers from past wars (calling them losers) and insulting John McCain who actually fought and suffered for his country.  This from a man who sat out the Vietnam War; escaping the draft 5 times due to questionable deferments.  He is often thanked for keeping America out of a new foreign war which is a good thing in my opinion because imagine someone as volatile, stubborn and immune to facts as him in charge of a ground war.  Trump was no Hitler, or even a Kaiser Bill.  His closest equivalent would be the laughable, posturing, and ultimately politically irrelevant Benito Mussolini.

To be fair I don’t think Trump did everything wrong.  Bombing Syria after they kept using chemical weapons, helping Israel negotiate some peace treaties with Arab powers, and calling out China in certain cases was okay in my books.  And to put all blame for American ills and mishaps during the last 4 years on one man is simplistic however tempting.  Yet on balance I don’t think history will be kind and give Trump an A+…  although he has more than earned a participation trophy.

If the last few years has shown anything it is that politics matters:  It matters if you vote, who you vote for, who comes to power, how much you hold politicians and the system accountable, and that all the vestiges of democracy and freedom that so many people dismiss or shit on should not be taken for granted.  And that part of the equation is not Trump’s fault but the people.  This includes not just the American people but others as can seen by the many idiots we have elected across the world (not just racist populists).  Many people, who are understandably wary of politics, think they are somehow wiser by not voting, caring or being politically informed but this only encourages politicians (of all parties and political leanings) to be more dishonest, corrupt, and use the system solely  for their own gain.  I never understood how apathy and ignorance was suppose to limit rather than encourage dysfunctional politics.

People who constantly complain about politics but have never done a single thing to try to change things (petitions, protests, writing a letter to an MP, using the media, forming a lobby group, running for office or even VOTING) should get a reality check.  Soldiers before you have suffered in mud and blood to guarantee your freedoms.  Activists before you have been subjected to unheard of racism, sexism, intolerance, violence and threats to bring you more equality and human rights.  There are a lot of problems in our liberal democracies, along way to go, and as a white male I’m sure many would be tempted to say I am out of touch, but I do know this:  Compared to previous generations and many contemporary countries we are spoiled, spoiled, spoiled, and spoiled when it comes to freedom, prosperity, opportunities and the chance of having a decent life.

People across the world fight and die for freedom, the right to vote and to have more opportunities.  Others immigrate here and are probably incredulous how we think we have it so bad!  All of this is on us… not Trump, our governments, political and economic elites but us… the electorate who often doesn’t bother doing the minimal.  The Civil Rights Movement, Women’s Liberation, Gay rights and D-Day were not won by doing the minimal.

Anyway, back to Trump:  If your idea of a great political leader is a blatantly dishonest, narcissistic reality TV Star maybe ask yourself if you think politics is a silly game instead of a serious instrument that will impact the lives of your children.

I don’t know who is gonna miss Trump more:  His worse supporters who still see no irony backing someone who inevitably became the sort of indifferent, corrupt and snobby elite they hoped he would cleanse from the political establishment?  Or his most rabid opponents who spent the last 4 years letting Trump get under their skin and made hating him part of their core identity.  Who are the former gonna support now and who are the latter going to hate from now on?  I don’t know and I don’t care because people always search for false prophets or something to fight against.

All I know is this.  I am so tired of hearing about Donald Trump from both sides, TV, and the media.  He lost, he’s gone, “he’s fired” and let’s try to move on to something more positive in our lives.  There are a lot of pieces to pick up, many things to overcome and the sad realization that American democracy and greatness has been sick and decaying over the last generation.  Trump was not the cause of this but merely a potent symbol of it.  It will outlast him for a long time if things don’t change.  In a way we should be grateful that his reign showed everyone just had bad things were boiling under the surface.

The real battle for the soul of America hasn’t ended… it has only begun!