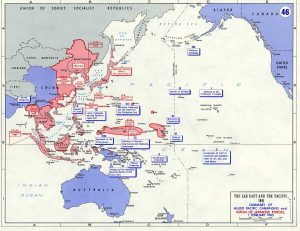 This last week was the 70th anniversary of America dropping nuclear bombs on Hiroshima and Nagasaki. Naturally there was the typical criticism, and moral outrage, by countless people which usually drowns out those who offer a more informed and sober analysis as to why dropping nukes on Japan was necessary. It is often said that “history is written by the victors” yet for some reason a sizeable segment of at least Western opinion, perhaps the majority, sees the Japanese as victims and the Americans as the aggressors. Such a perception is exceedingly false.

Japan was the aggressor in the “Pacific War,” overrunning much of China, South East Asia and the Pacific while America had been initially an isolationist country which became reluctantly involved in the war after the Japanese attack at Pearl Harbour. Japan brutally enslaved and slaughtered millions of people in Asia from China to Burma, the Philippines to Indochina, and from Korea to Hong Kong. They were so cruel, exploitive and feared that the inhabitants of these countries were actually grateful when the British and Americans returned to their countries and the inhabitants generally aided them rather than collaborate with the Japanese. Think about this; most asians preferred British imperialists and paternalistic Americans to their fellow asians, the Japanese! To this day countries such as China, both Koreas, Vietnam and Taiwan hold considerable grudges against Japan both for her conduct during the war as well as her misguided and shameful efforts to negate responsibility for, let alone admit, Japanese war crimes.

While well meaning people can rightly be shocked by nuclear attacks that killed between 125,000 and 250,000 Japanese civilians it is rare that world opinion, especially Western and Japanese, expresses outrage by the infinitely worse crimes committed by the Japanese during the war. I remember in high school being taught about Hiroshima and Nagasaki but hearing nothing about the at least 10 million Chinese killed by Japan during her occupation of China, not to mention the literally 100 million Chinese war refugees created by the conflict. The almost 20 million Asians killed during the war, the “Rape of Nanking,” the “Bataan Death March,” the “Death Railway,” the indiscriminate slaughter of remote islander inhabitants during Japanese training exercises, and the atrocious death rates of POWs under Japanese care are also barely addressed and seldom remembered by the naive, biased people who hate America but almost eagerly let Japan off the hook.

Certainly next to no one knows about the sick medical experiments Japan conducted in Manchuria on human beings, that her army coerced thousands of Korean females into being comfort women who were repeatedly raped by Japanese soldiers, her plans to use biological weapons against American civilians, or the fact that Japan was the only county to use chemical weapons in “World War 2” (not even Nazi Germany did that!).

This is the context in which Harry Truman made the decision to use nuclear weapons against Japan:

The worst war in human history which had been going on for nearly 6 years was not yet over. More than 50 million people had died, and countless more were wounded, became war refugees or were psychologically devastated due to their wartime experiences or seeing loved ones maimed or die. Some military experts believed the war with Japan could have continued for another 2 years if nukes had not been used. Thousands of allied soldiers were dying each week fighting Japan while countless other civilians across Asia were dying as well. Indeed, the editor of the journal Foreign Affairs, Gideon Rose, concluded that for every month of 1945 while the war continued the Japanese were causing the deaths of somewhere in between 100,000 and 250,000 civilians. Finally, people across the globe were war wearied and just wanted the conflict to be over.

America was faced with perhaps 3 options to defeat Japan. The first involved starving the Japanese into submission over an indefinite period of months in which case countless more allied soldiers, asian civilians, and especially Japanese people would have died vs. the 125,000 to 250,000 which resulted from the atomic attacks on Hiroshima and Nagasaki. Considering how callously the Japanese leaders sent their soldiers to die and how little they seem to have cared about their own civilians during the fighting in Saipan and Okinawa it is very probable that they were willing to lose millions of Japanese in a vain effort to hold out.

The next option involved invading Japan, which would have required an operation so massive it would have made the “Normandy Invasion” in 1944 appear as child’s play. The American estimates as to how many of their soldiers would die, or be wounded, was between a few hundred thousand and a few million, with considerably more casualties inflicted upon the Japanese. Once again this would have been a larger number of casualties than those suffered due to the atomic attacks, and does not even include the countless asian civilians who would still be dying under the Japanese yoke.

It should also be noted that when the Americans landed in Japan after the war and saw the defences the Japanese had constructed to defend against invasion they were considerably more impressive than the former had imagined. Additionally, American intelligence had been mistaken about how many planes the Japanese had left, especially Kamikaze fighters. Keeping these two factors in mind it is possible that even higher casualties could have resulted from an invasion than a few million for the Americans and Japanese!

The third option was of course using nuclear weapons on Japanese cities in an attempt to shock the Japanese leadership into surrender. After being implemented this caused considerable suffering for the peoples’ of Hiroshima and Nagasaki, killed scores of innocent people and could definitely be labelled a war crime. However, it had certain advantages. It ruled out a costly naval blockade that would have killed perhaps hundreds of thousands of Japanese and prolonged the war considerably. It also ruled out a costly invasion that would probably have resulted in millions of American and Japanese casualties. Finally, it had the chance to immediately end the war.

And it did! It instantly ended the most destructive and brutal war in history. It ended it for America without a single American soldier setting foot on the Japanese mainland. People love throwing “World War 2” statistics around such as the 6 million Jews killed in the holocaust, the more than 20 million Soviets killed during the war, or even the 90,000 Japanese killed during the firebombing of Tokyo. Yet perhaps another statistic proves how effective the nuclear bombing of Hiroshima and Nagasaki was: 0 American or allied soldiers, sailors or airmen were killed or wounded in an attempt to invade Japan.

This should not be dismissed out of hand. Harry Truman would have known that 400,000 Americans had already died in the war (including over 100,000 in the pacific) and that an invasion of Japan would have potentially exceeded this already significant number. From modern standards it is even more incredibly as Americans could not stomach 60,000 dead in Vietnam, and barely tolerated 5000 dead in Iraq. Meanwhile Canada with a significantly smaller population tolerated 45,000 deaths in “World War 2” but could not take much more than 150 in Afghanistan in the 21st Century. America even pulled out of Somalia after suffering 18 deaths in a single day. How can modern society blame Harry Truman for trying to save countless American lives when it is willing to tolerate so few military deaths itself?

There is of course the argument that the Americans could have nuked an uninhabited island to show the Japanese the effects of the bomb. Maybe it would have worked, but most likely it would have not. It is all but certain that the admittedly cruel, but shocking effect of destroying 2 cities with a single bomb each was the only way to motivate the intensely militaristic and die hard zealots that comprised the Japanese leadership to surrender.

Finally, there is another argument that Japan would have surrendered anyways within a few months. Yet how does anyone know this would have happened without blockade, invasion or nukes, or even if they did surrender how long it would have taken? Weeks, months, half a year? And how many more allied soldiers, asian civilians and Japanese would have died during that period? By far a lot more than the combined death toll of Hiroshima and Nagaski.

False paragons can argue a warcrime is a wartime and preach morality when they have never had to make decisions that affect the lives of millions or lived in a time where people sacrificed themselves so that future generations could have a better way of life. Most people today cannot even sacrifice putting down their cell phones for more than 2 minutes at a time to engage in a real life conversation. Yet in the real world, and especially warfare, not everybody wins, or can be saved, and thus decisions should be based on practical considerations regarding how to minimize how many people will be lost. In the case of the nuclear attacks on Japan it resulted in the deaths of perhaps 125,000-250,000 vs. the considerably more deaths that would have resulted from any other option including blockading, or invading, Japan or simply waiting for them to surrender.

Additionally, people can criticize, or even hate America for dropping the nukes on Japan if they want to because it is a democracy that allows freedom of speech and rarely hides its crimes, mistakes or controversial acts throughout history. Countless American authors, citizens and even school curriculums are allowed to debate and criticize the decision to drop the bombs without any interference of the U.S. Government. Meanwhile Japan seldom admits its considerably worse atrocities committed during the war while its society in general, and her school system in particular, has attempted to portray the Japanese as the victims in the conflict.

This is historically, morally, and factually incorrect. Japan started the war, did so to conquer and subjugate Asia, and killed countless more people than America or her allies in the Pacific.

Japan was unequivocally the aggressor in the Pacific during “World War 2” and not the victim. However tragic and sad the nuclear attacks on Hiroshima and Nagasaki saved more lives than they destroyed and were thus justified.