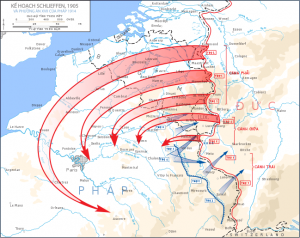 The “Schlieffen Plan” of the First World War is arguably the most widely known battle plan in the history of warfare.  It is thought that Count Schlieffen’s plan was based on Hannibal’s victory at Cannae and inspired by the last chapter from Carl Von Clausewitz’s “On War” entitled “The Plan of a War designed to Lead to the Total Defeat of the Enemy.”  Ultimately the plan failed.  Or did it?  It is well known that certain aspects of the plan were changed by Schlieffen’s successor Moltke the Younger.  Many of these changes were crucial to the original plan and Count Schlieffen criticized Moltke the Younger for altering his magnum opus before he died.

As Moltke the Younger had made several changes in the plan, once it failed to defeat the French he became the obvious scapegoat.  But while it is true that his changes had significantly warped the original version of the “Schlieffen Plan,” one must also remember Moltke the Elder’s (Moltke the Younger’s uncle) sound maxim that “no battle plan survives contact with the enemy.”  For even Count Schlieffen’s original plan, with all its methodical calculations, failed to take into account a few variables that with or without Moltke’s changes, may have doomed the “Schlieffen Plan” from the start.

First it is necessary to illustrate the context in which the original “Schlieffen Plan” was devised and how it was supposed to work.  In the event of war, Germany assumed it would have to fight the French in the west and the Russians in the east.  Faced with such a strategic nightmare the obvious solution was to quickly defeat one nation, freeing the greater part of the German army to then concentrate against the other.  The only question was which country would be dealt with first.  Although Russia was still a backward state with an inefficient army, its geography made it difficult for the German Army to strike a quick and decisive blow.  France on the other hand had a relatively competent army and a frontier lined with powerful fortresses.

Russia was eventually ruled out because of her vast geography which left France as the default target.  But instead of attacking the French via their frontier as it did in 1870, the German Army would invade Belgium (by passing the French Forts), enter France from the north, swing around Paris and trap the French armies massed on the German border.  All this depended on the French Army concentrating on the Franco-German border to facilitate an attack designed to regain their lost provinces of Alsace-Lorraine.  In the event this is exactly what the French did.  The plan also assumed that Russia would not be able to complete its mobilization of forces before France was defeated.

The plan was supposed to work like this:  While the German forces guarding the Franco-German border would purposely withdraw (luring the French Army into the trap), the main German Army would invade Belgium, enter northern France, swing around Paris and then move on the rear of the French Army, trapping it between the frontier and the Germany Army.  It was supposed to succeed in six weeks (how long the Germans assumed it would take the Russian Army to mobilize) and was designed as a battle of annihilation.  If the time frame seemed short it should be remembered that the Franco-Prussian War and the Battle of France in 1940 were both decided in the same amount of time.

Though the plan was simple in theory, Count Schlieffen demanded that a few factors had to be observed.  Firstly, the right wing of the attack had to be strong; it has been remarked that Count Schlieffen’s last words were “remember, keep the right wing strong.”  Secondly, the German forces on the frontier had to withdraw to make sure the French Army would walk into the trap and not be able to rescue Paris once they realized what was happening.

Finally, given the many logistical considerations associated with the plan, it was originally planned that the Maastricht Pocket of Holland would be invaded in addition to Belgium in order to give the German Army the necessary room to maneuver.  A quick look at the tri-border region of Germany, Belgium and Holland in any atlas reveals how much extra space the German Army would have had to establish more orderly lines of communication had it stuck to the original plan.  According to Count Schlieffen all three of these considerations were vital, and when he was succeeded by Moltke the Younger all three were quashed.

The right wing of the attack was weakened to prop up the German forces on the frontier so they would be strong enough to attack France as well (thereby changing their original role of luring the French into a trap).  This change was more political than strategic.  Certain German commanders on the frontier wanted more offensive roles than merely fighting withdrawals, but more significantly General Pollio (the Italian Chief of Staff) promised that Italian forces would join the Germans in the event of war, and that they would be stationed in Alsace.  If Italian forces were promised to come to Germany’s aid Moltke the Younger probably wanted to make sure Alsace was still under German control when they got there.  In the event, Italy did not join the Central Powers at the outset of war and ended up joining the Allies in 1915 instead.  As for the advance through the Maastricht Pocket Moltke the Younger believed Holland would serve as Germany’s “economic windpipe” in case the war became prolonged (a role it did in fact play for the first few years of the conflict).

As such, when war broke out in 1914 the “Schlieffen Plan” could very well have been called the “Moltke Plan” instead (though technically it still mostly contained the original strategy and goal).  However, it soon became apparent that Moltke the Younger’s changes had been mistakes.  The now diminished right wing was incapable of destroying the small British Army at “Mons” and “Le Cateau” and subsequently shifted its advance directly on Paris instead of encircling it.  The reinforced German armies on the frontier did inflict horrendous casualties on the French Army trying to retake Alsace-Lorraine, but did so at the expense of leading it into Schlieffen’s original trap.  Once the French realized the real threat was the German Army advancing from the north, they still had enough time to double back and protect Paris.  As for the decision not to advance through the Maastricht Pocket, the logistical difficulties experienced by the German Army passing through the narrow German-Belgium frontier eventually became what Rommel would call “a quartermaster’s nightmare.”

However, the situation was not yet critical and the Germans still had a chance to finish off the French.  Admittedly the quick arrival of the British Army was a shock both versions of the Schlieffen plan had not anticipated and the French would now have to be dealt with head on instead of hitting them from behind near the Franco-German border.  Additionally, it was becoming clear that even had the Germans overrun the Maastricht Pocket the logistical difficulties of the plan would still have been considerable.  Despite all of this, the Germans knew the French had been seriously bloodied by their ill-fated attempt to retake Alsace-Lorraine and were still relatively disorganized.  Paris, Moltke the Younger believed, would soon fall to the Germans.

Then disaster struck.  To the amazement of all, Russia had not only mobilized quicker than anticipated but was poised to overrun Eastern Prussia.  Faced with such a situation, Moltke sent substantial forces from the Western Front to the Eastern Front.  With his now diminished forces he had little hope of winning the upcoming battle in the west.  With their new-found superiority the French and British Armies counterattacked by advancing into the Gap between the German 1st and 2nd armies.  The German Army was forced to retreat, Paris had been saved and most importantly the “Schlieffen Plan” had failed.  Ironically, while the German reinforcements sent to remedy the situation in the East were half-way there the Russian Army was decisively routed in the “Battle of Tannenberg,” while in the west the German Army was pushed back in the “First Battle of the Marne.”

Why did the “Schlieffen Plan” fail?  Firstly, the changes Moltke the Younger made to the original plan considerably lowered the chances of it inflicting a knock-out blow.  Secondly, both plans assumed that Russia and Britain would not be able to come to France’s aid in time.  Finally, the logistical considerations of the plan were seriously underestimated.  While it could be argued that each one of these factors by themselves were not enough to doom the plan; combined they succeeded in turning Count Schlieffen’s dream into a nightmare.